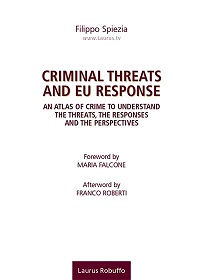 Foreword by Maria Falcone
European Union and criminal challenges
Some useful premises
Attack on Europe in 2015
An Atlas of European crimes
Crime and its global vocation: an unprecedented growth
An European “radiography” of organized crime
International cooperation and national languages
The role of European Agencies: not only Europol but also Eurojust
Where is the European Union going: what are the perspectives for the safety of citizens
The challenge of international terrorism: an unprecedented attack on the EU
The worst year for Europe: 2015 and the threat of foreign fighters
The threat spread from France to other European countries
The evolution: from Al Qaeda to Isis, all the way to the birth of individual terrorism
Islamic Terrorism and the web
Could the 2015 attacks be foreseen?
The cases of the Kouachi brothers and Amedy Coulibaly
The attacks on November 13th, 2015: a project that was conceived and organized abroad
The flaws in the European information system
The new EU strategy after 2015: cooperation is the keyword
The role of Eurojust and the institution of the European
Counter-Terrorism Register
The latest attacks of 2020: the threat is still to be defeated
What to do to be safer?
The 2020 counter-terrorism Agenda
Mafia in Europe
The mafia “magma”: definitions and evolutions of the phenomenon
Drugs: endless wealth for the mafias
The evolution of the business model of mafias
Mafias in Europe and the reasons for their expansion
National and European laws: still many gaps to fill
A virtuous example: Pollino Operation .
Coordination can be winning, as long as…
Something is moving…
The third-millennium slavery in the heart of Europe
Smuggling and Trafficking: a distinction to better understand the tragedy
Human trafficking in the heart of Europe: shame is among us
Which responses of the European Union? Are law enforcement measures enough?
Migration crisis and the EU: the flaws of the system and the data of the crisis
The fight against migrant smuggling: the efforts of the European Agencies
Can traffickers be defeated? The example of the ‘Glauco operations’
The urgent need to make new choices: Europe can no longer wait
The last call for the EU: a new Pact on Migration and Asylum
The Final Frontier: crime travels on the web
The phenomenon: lots of victims, but who is responsible?
Crime 0: what are the challenges and can we defend ourselves?
Respect for human rights is not a less important matter
The EU response and its strategies
Europol’s activity
The role of Eurojust and the creation of virtuous models
The persistent issues
What should we do to improve our justice systems and citizen protection?
Covid-19: new opportunities for the EU or for criminals? The Pandemic: an opportunity to relaunch the European project?
Covid 19: criminals do not go into quarantine. Trends in progress
Counterfeiting medical products and Covid-19 vaccination
Cybercrime and Fraud schemes
Increased risk of infiltration of OCGs and mafia types criminal groups in legitimate companies
Drug trafficking: the business continues
Migrant smuggling and human trafficking: new handy profits
How to get out of the woods: Ideas for a new EU
Area of Freedom Security and Justice
We have been through a tough crisis
Europe is reacting: the reasons to relaunch the path
Afterword Redirecting the action at the European level by Franco Roberti