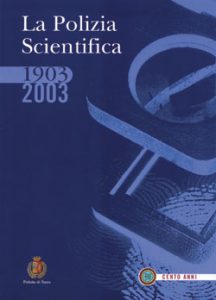 The book illustrates the work of the Forensic Unit, one hundred years from its creation.  It follows its development through the years in an original outlook that takes the form of a brief novel transmitting to the reader the most significant meaning of the concept of the Forensics Unit itself.  The methods used during the early years of the century are dealt with quickly followed by the development of investigative epistemology and through an excursus into history aimed at emphasizing the role of the founding fathers of the science and chronologically outlining the more important milestones.  A voyage that materialises before the reader through images drawn from the original files of on-the-scene investigations, in some cases famous cases of the past solved also thanks to the contribution of the Forensic unit.  The portrayal of professional figures, official duties, objectives and initiatives that involve international cooperation, all present to the reader the image of the Forensics police Unit of the XXIst Century, dynamic and in constant expansion.